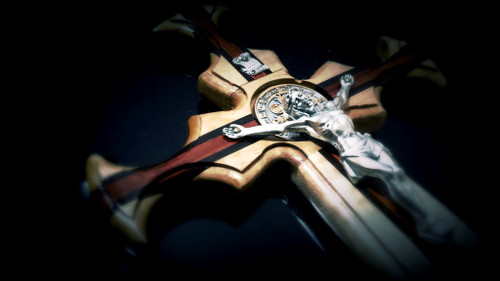 Due to a recent discernment that we will be focusing on evangelization for the youth for 2019, we are constantly on the road but  we can build by order only.    Thus, we ask that you call us at (803) 526-8632 if you want us to build this beautiful sacramental  asap.

A crucifix for patience, forgiveness, repentance, and faith

This is believed to be a very special crucifix.  Not only is it a Trinity Benedictine Crucifix because there are three woods that make up the cross, it also has two powerful marian medals.

The front medal is the Miraculous Medal, where tremendous faith miracles were attributed to.

The back marian medal is the Lady of the Undoer of Knot, a favorite novena of Pope Francis. Why is this so?  It is because the Lady of the Undoer of Knots , a 300-year devotion,  resulted to many spiritual healings such as reconciliation of destroyed families, saved marriages, personal conversions, the re-discover of the meaning of the life and of spiritual and moral values, a renewed appreciation of the value of the Holy Eucharist, of Christ and of the Blessed Virgin Mary.

The Miraculous medal is designed by the Blessed Mother herself through a Church-approved  apparition in 1854.  The front of the medal depicts Mary standing on a globe, with the head of a serpent beneath her feet. Circling the oval-shaped medal is the signature, "O Mary, conceived without sin, pray for us who have recourse to thee." On the reverse, twelve stars surround a large "M," from which a cross arises. Below the "M," the medal depicts two flaming hearts. The left heart, circled with thorns, represents Jesus. The right heart, pierced by a sword, symbolizes Mary.

What does the medal specifically mean?

The Front Side
• Mary stands on a globe, crushing a serpent beneath her feet. Describing the original vision, Catherine said the Blessed Mother appeared radiant as a sunrise, "in all her perfect beauty."
• Rays shoot out from Mary's hands, which she told Catherine, "... symbolize the graces I shed upon those who ask for them."
• Words from the vision form an oval frame around Mary: "O Mary, conceived without sin, pray for us who have recourse to thee."
Seen as a matrix, the elements of the front design encapsulate major Marian tenets:

Quality of Our Lady As Illustrated by the Medal
• Mother Her open arms, the "recourse" we have in her
• Immaculate The words, "conceived without sin"
• Assumed into Heaven She stands on the globe
• Mediatrix Rays from her hands symbolizing "graces"
• Our Protection Crushes the serpent (Gn. 3:15)

The Reverse Side
• A cross-and-bar surmounts a large, bold "M"
• 12 stars disperse around the perimeter
• Two hearts are depicted underneath the "M," the left lapped with a crown of thorns, the right skewed by a sword. From each, a flame emanates from the top. Again, employing a grid analysis, we can see how the reverse-side design contains great symbolism reflecting major tenets of the Catholic faith.

Design Element and its Catholic Meaning
• The large letter "M" — Mary as Mother, Mediatrix.
• Cross and bar — Jesus' cross of Redemption.
• 12 stars — 12 Apostles, who formed the first Church.
• Left Heart — The Sacred Heart, who died for our sins.
• Right Heart — The Immaculate Heart, who intercedes for us.
• Flames — The burning love Jesus and Mary have for us.

Lady of Undoer of Knots explained

But what are these knots?

They are the problems and struggles we face for which we do not see any solution.
Knots of discord in your family, lack of understanding between parents and children, disrespect, violence, the knots of deep hurts between husband and wife, the absence of peace and joy at home. They are also the knots of anguish and despair of separated couples, the dissolution of the family, the knots of a drug addict son or daughter, sick or separated from home or God, knots of alcoholism, the practice of abortion, depression, unemployment, fear, solitude…Ah, the knots of our life! How they suffocate the soul, beat us down and betray the heart’s joy and separate us from God

Trinity Celtic Benedictine Crucifix, Lady of Undoer of Knots with base stands

St. Benedict Crucifix with Our Lady of Carmel, 14-inch

St. Padre Pio print only in Foam Board