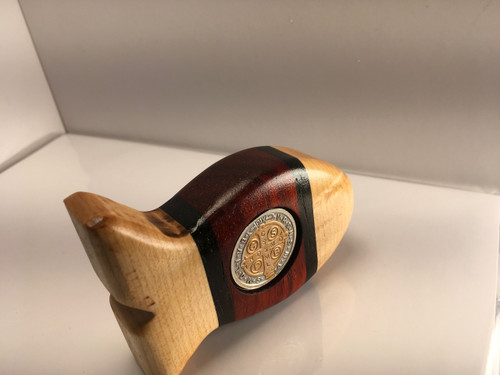 Due to a recent discernment that we will be focusing on evangelization for the youth for 2019, we are constantly on the road but  we can build by order only.    Thus, we ask that you call us at (803) 526-8632 if you want us to build this beautiful sacramental  asap.

"This expresses Christian heritage on so many levels. The commonly recognized “Jesus Fish” symbol was important for early Christians identifying each other secretly. But even earlier–early in the first century–the first symbol of Christianity was Jonah in the whale. The St. Benedict figure reflects that, even as it reminds us of the role of Monasticism in building the Universal Church."    ~ Peter John Stone, February 06, 2016

Facts from our Early Fathers

The St. Benedict medal is at the center of the fish and is tinted with some gold to highlight some parts of the Benedictine medal.

The blessed salt is another sacramental in a small glass container which fits at the back of the wooden fish.

This is a great sacramental for offices which can be camouflaged as a beautiful desk accessory.   In reality, the fish  depicts great reminders of the sacredness of work.  We can unceasingly pray at our workplace.  This Benedictine Fish sacramental will remind us to move our hearts toward God and to glorify Him all the time.

The Good News Cross of St. Benedict, without stand

All About Angels Illustrated by Cierra Campbell